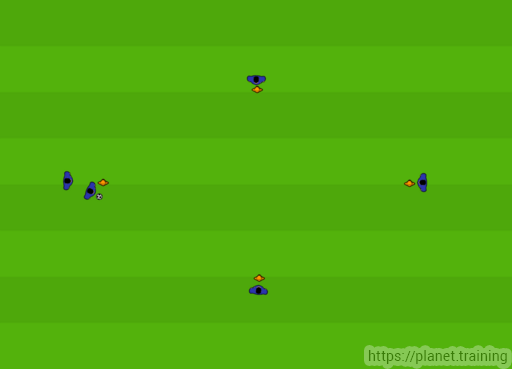 Following on from last week’s Inside Youth Soccer – Exercise of the Week, which you can read here, we are keeping with the technical passing warm up theme but focusing more on technique and the timing of movements.

Check out the description below and the video at the bottom of the page to see how it works!

Split your team into groups of five (you could do groups of six instead if that works better), with one ball per group. Two players will be at the start cone and one player on each of the other cones. Adjust the size of the diamond depending on the age and ability of your players. It is also important that the players imagine that the cones are defenders from the beginning so that they understand early on the significance of the movements away from the cones/defenders.

The ball starts on the cone that has two players and the ball is passed in a anti-clockwise direction. Don’t forget to get the players to go in the other direction after a few minutes.

If you have a few groups going at the same time, you can challenge them to get the ball around the diamond as many times as they can in 30 seconds to add a little pressure and urgency to their passing. Again, don’t forget the do the competition in both directions.

You can progress this passing sequence in many different ways, so be creative! In the second half of the video at the bottom of the page, the first player that receives the ball will set it back, before the ball is passed across the diamond.

Don’t forget to follow Inside Youth Soccer on social media by clicking on the links below!